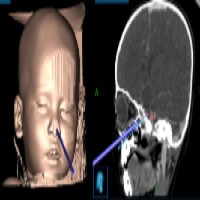 First time in the world, the youngest ever patient who had a large brain tumour (craniopharyngioma) removed through the nose endoscopically by a team of endoscopic skull base surgeons, Dr. Dhandapani SS and Dr. Sushant from Deptt. of Neurosurgery and Dr. Rijuneeta from Deptt. of ENT, PGIMER created history.

16 months old girl child from Uttarakhand referred to PGIMER, with symptoms of loss of vision. The child was normal and playful but for the last 20 days, the mother noticed that the child was unable to follow anything shown to her. The child’s MRI revealed a calcified brain tumour of craniopharyngioma of size 3 cm, large for a child of 1 year, close to critical neural structures such as optic nerves and hypothalamus.

These tumours are usually operated on through open surgery, and the remaining part is treated with radiation therapy. Over the last few years, such tumours are being removed through the nose endoscopically by neurosurgeons teaming with ENT surgeons among patients older than 6 years. However, endoscopic removal through the nose is highly challenging in small children because of small nostrils, immature bones at the skull base, and proximity to crucial blood vessels. The youngest child reported to date having undergone endoscopic surgery through the nose for such tumours was 2 years old, operated in 2019 at Stanford, USA.

Dr. Dhandapani chose the endonasal corridor, as the skull opening and brain retraction are avoided if operated through the nose. The team studied the child elaborately using CT angiography navigation and planned for endoscopy. A thin high definition endoscope, micro-instruments, and laryngeal coblator were used during the initial steps. Reaching up to the tumour was difficult, as the bones and sinuses were immature. The typical air sinus, which usually gives a corridor to reach up to the tumour base, was absent in this child.

The nasal stage was performed by ENT surgeon Dr. Rijuneeta, while the skull base part was completed by Neurosurgeons Dr. Dhandapani & Dr. Sushant. Extensive drilling of the immature bones with a diamond drill was carried out using computer navigation to create a tumour removal corridor. The tumour was dissected from critical structures using angled endoscopes and removed through the nose despite very little working space. As endonasal endoscopic surgery of brain tumor can cause brain fluid leakage through the nose, the vascularized flap taken from inside the nose was used to seal the operative corridor along with fascia and glue.

Though Dr. SS. Dhandapani’s team has previously removed even giant tumours through the nose, this youngest child in the world to undergo such advanced endoscopic surgery is a remarkable achievement in the history of paediatric neuroendoscopy.