73 years to Start a school since Independence 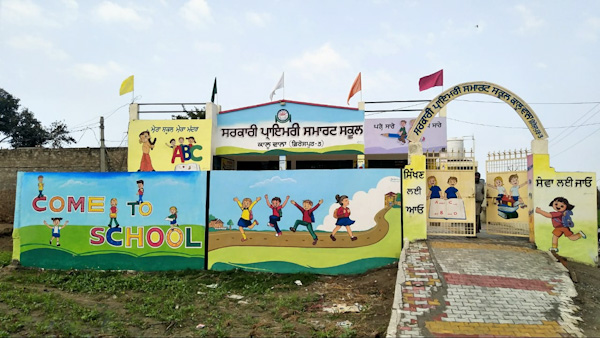 73 years to Start a school since Independence. Every building has a history to the tale but this particular building has not only a history for generations to come but also has emotions of many aspiring futures. We are here talking about a School that starts functioning after 73 years of Independence. School is placed at Natural Island Kaluwala near an International Indo-Pak Border.

Since Independence naturally created Island Kaluwala near Indo Pak Border has been waiting for a School. The Punjab Government while prioritizing the education first for this area, started this initiative to provide education to 30 lads of this area.

The first government primary school on the naturally created island Kaluwala near the Indo-Pak border which is now bordered on three sides by Sutlej River and on one side by the Indo-Pak border. For the students of this Island, it seems like independence grooms after 73 years with the creation of this educational temple.

The Kaluwala island was created naturally in the year 1988 when a swollen Sutlej changed its course and split into two branches near Kasso – a BSF Border OutPost to become one river again at Chandiwala village. A 5-mile route created an island, which was cut off from the mainland. There are two secluded villages —Kaluwala and Nihalewala – a few 100 meters from cobra fencing, along the India-Pakistan border and depict a picture of neglect.

The opening of the school near the international border is the concept of Secretary Education, Krishan Kumar who during his visit to the border area schools had felt the need of this village. The Kaluwala GPS is now one of the best smart schools in the state with a modern infrastructure and a staff of two teachers. More than 30 students have been enrolled in the school for Pre-Primary to 5th classes. The dream of Parents as well as students got to be fulfilled after 7 decades of the long wait.

Dr. Satinder Singh Principal said, “The School has come operational at a cost of Rs.15 lac, with an attractive look, it will be a great relief to the children of the village Kaluwla with unique geographical conditions.”