Jan 29, 2018 Condoms, Contraceptives, Facts, female, figures, intrauterine devices, methods, NHFS, panjabans, pills, Punjab, sterlisation, tops
Share it
A larger number of unmarried, sexually active women are now opting for safe sex. The National Family Health Survey 2015-16, conducted by the health ministry, found that the use of condoms had gone up in 10 years from 2% to 12% among sexually active unmarried women aged 15 to 49 years.

The maximum use of condoms among unmarried women was seen in the 20-24 years age group. The survey also found that three out of eight men believed contraception was “women’s business”, and that the man should not have to worry about it. 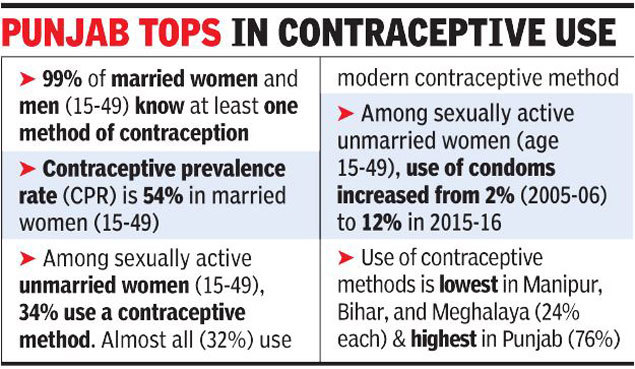 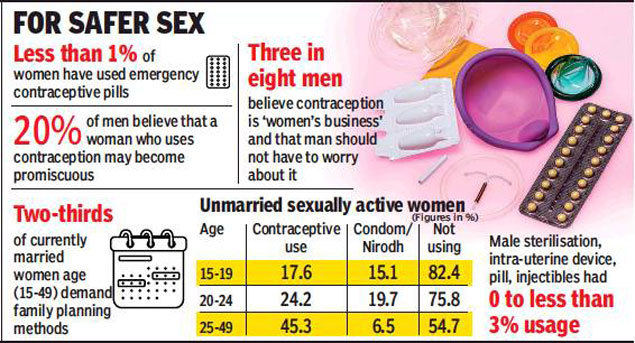 Among unmarried, sexually active women, though, the prevalence of modern contraceptive methods was much higher, the survey found. A fairly large number were opting for female sterilisation as well, especially in the 25-49 years age group.

In fact, female sterilisation was found to be the most popular method of contraception whereas less than 1% of women had ever used emergency contraceptive pills, the survey found.

The fact that the number of unmarried women using contraception has gone up is especially heartening in the face of other statistics thrown up by the NFHS-4 survey, such as 20% of the men interviewed believing that a woman who used contraception may become promiscuous.

The survey also found that 65% of Sikh women and Buddhist/Neo-Buddhist women used modern contraception, compared with 38% of Muslim women.

Unsurprisingly, modern contraceptive use increased with wealth, from 36% of women in the lowest wealth quintile to 53% in the highest quintile.

Almost seven in 10 (69%) of modern contraceptive users obtained their method from the public health sector, the survey found.

The NFHS-4, prepared by the International Institute for Population Science (IIPS), consisted of interviews and field tests of 6,01,509 households with a response rate of 98%. The survey was started in the 1990s.

Courtesy: The Times of India